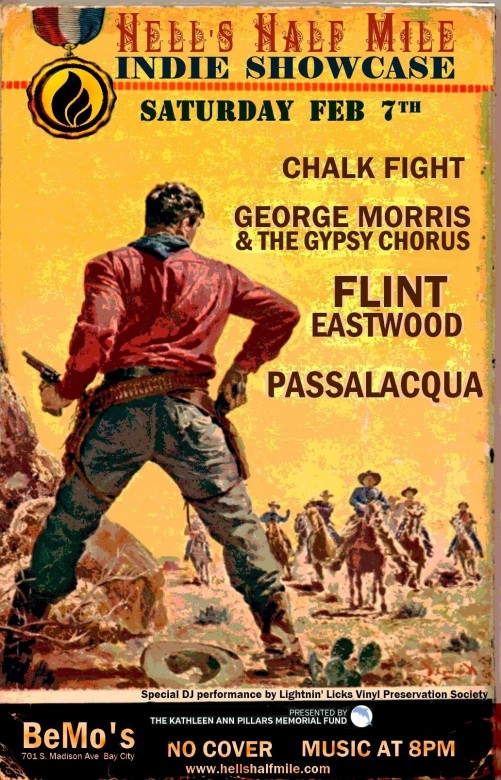 Gather round, Hellions. Are you ready for the next installment of 2015’s HHM Indie Music Showcase series? Hopefully you are, as some of the festival’s favorite alumni are returning for one hellacious, raucous shindig.

Before and in-between bands’ sets, the Lightnin’ Licks Vinyl Preservation Society will keep the music flowing and the dance floor moving.

In an attempt to capture the man responsible for their father’s death, the hip-hop bounty-huntin’, mic-packin’, rhyme-slingin’ duo of Mister and Blaksmith are once again set to blaze a trail due North through the treacherous terrain of Hell’s Half Mile, all the way to BeMo’s Ranch. Luckily, the Passalacqua Posse has in recent years found more friend than foe in the cozy yet gritty confines of Fort Pontchartrain du Détroit, for this trip they will not be traveling alone. They got peeps, yo…compadres roll deep.

Truth is, no worthwhile caravan is complete without a band of potion-peddlin’, mind-meltin’ modern-day troubadours. This delicious Gypsy Chorus, led by handsome yet mysterious luminary George Morris, is sure to add a splash of Dr. Good to an already murderous cast of bandits. Give me a second. Wait. F#@% it.

En route to the ranch, our heroes will stop to meet up with Chalk Fight, a gang of young Genessee-region degenerates determined to find themselves thick in the mix of an adventurous trek so legendary that no pen or tongue could do justice while describing. Ever. Never. Nevah-nevah? No, never.

Get the word out and bring your friends. Plan on getting there early, as each showcase grows in attendance, and the last time Passalacqua and Flint Eastwood played BeMo’s together, the maelstrom they stirred up of beats and bodies nearly brought the building crumbling to its foundation.