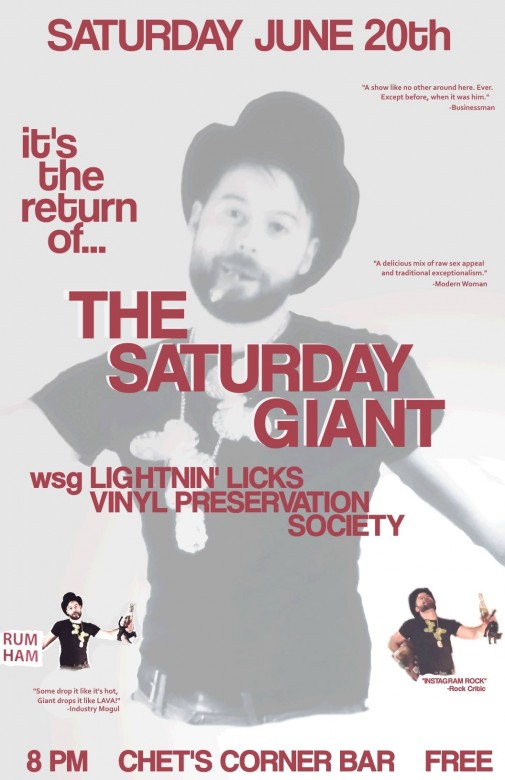 Guess who’s coming to town for another scintillating evening of dulcet tunes?

That’s right, it’s touring troubadour The Saturday Giant. This will be his fourth time in Bay City in recent years and his second time at Chet’s Corner Bar, 100 S. Madison Ave.

If you’re unfamiliar, the Giant (AKA: Philip Cogley) is a one-man band with musical depth for days. Don’t let his minimalistic personnel give you any misconceptions, for the bevy of sounds he conjures from his varied instruments is astounding. While performing, he records layers on layers of sound, looping melodies and percussion over one another, building a vivid aural tapestry. Original compositions and drastically reworked covers compose his sets, of which he’s playing two at Chet’s. Plus, his stage patter is second to none. For a Hell’s Half Mile Film & Music Festival Special Engagement Event, there’s scarcely a more engaging artist.

To get an approximation of what the Saturday Giant is in a live setting, visit his Bandcamp page to sample his EPs. His most recent release, Prepartum, features three live covers, a tweaked original, and a new cut.

Lightnin’ Licks Vinyl Preservation Society will be on hand to spin before and between the Giant’s sets. Admission is free, so there’s really no reason not to attend if you like original music and camaraderie.

The performance is less than a month after the hugely successful second annual All-Day Indie Music Showcase, which was held May 30 at BeMo’s Bar. Though rain kept forced the show to be contained inside, all 10 bands were killer and the establishment was packed. Local alt. event planner Patrick Ewing’s Flattop (AKA: Pat Tanner) co-organized the show with HHM, and kudos to him for making the collaboration the triumph it was.

Looking ahead, the next HHM Indie Music Showcase is slated for Saturday, July 25, at BeMo’s, 701 S. Madison Ave. Keep your eyes peeled and ears open for an announcement on the lineup.