Alright lads and lassies, it’s time for another Hell’s Half Mile Indie Music Showcase, this time with a wee bit of a St. Patrick’s Day theme. On Saturday, March 19 — that’s one day before the 62nd annual Bay City St. Patrick’s Day Parade, mind you — we’re hosting a night of indie rock dabbling in the funk, jazz, art, electro, and prog realms. The St. Patty’s theme comes in the form of Brooklyn Boyz Pizza graciously providing some green garlic knots and green pizza for the gig.

Coming back for their first time in 10 months in support of their latest EP “norepinephrine + dopamine” is Odd Hours. Bookending them are two acts new to the HHM banner — Earth Engine and VSTRS. All three bands are known for their refusal to be pigeonholed into any single genre, Frankensteining disparate elements into new concoctions.

Equal parts post-punk, industrial, and glam rock, Odd Hours are experimental to the core, but pepper their songs with myriad earworms. They’re a spectacle to behold on stage, with the commanding presence of vocalist Natasha Beste and guitarist Timothy Jagielo’s performance-art approach.

VSTRS also have penchant for sonic experimentation. Spacey and grinding, psychedelic and pummeling, shimmering and murky, they’re like Radiohead mixed with Tool mixed with Smashing Pumpkins, without being too self-serious. They released their marvelously evocative eponymous LP in July 2015.

The show is at BeMo’s Bar, 701 S. Madison Ave., and doors are at 8 p.m. Lightnin’ Licks Vinyl Preservation Society will be spinning before, between, and after the bands. As always, there’s no cover. 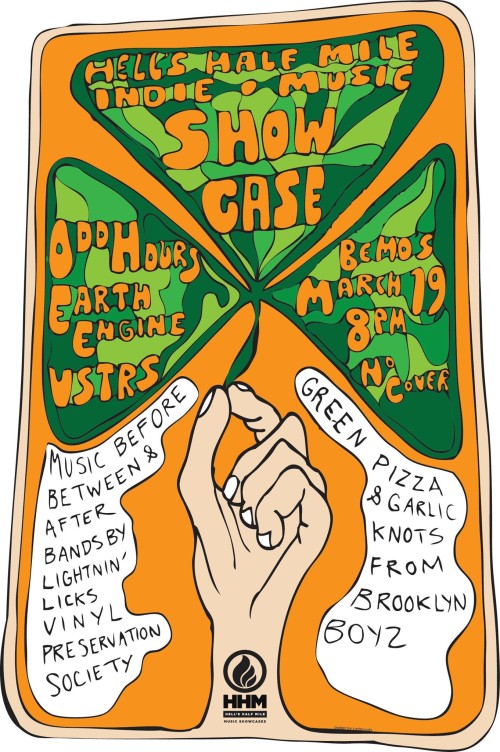